skip to main | skip to sidebar

Fourteen years ago, a childhood fantasy "took root" and was lovingly nurtured in the heart of an incredibly sweet, young Argentinian boy, growing and growing until eventually it became, in the lad's own words, his lifelong dream.

Can you imagine how much pleasure it brought to the heart of this "Real Jamaica" innkeeper in Ocho Rios, when she was lucky enough to be instrumental in helping this now young gentleman bring his long, cherished dream to fulfilment ?

Since the first time 8 year old Juan Martin avidly watched a recorded performance of Bob Marley, he has longed to become a Rasta and play drums with the Nyahbinghi. With the surprisingly loving support of his Mamma and his Pappa, Juan Martin arrived in Jamaica this past March, at the ripe old age of 22, earnestly seeking the fulfilment of his dream.

Juan Martin's adventure started in Kingston and climaxed on the outskirts of Ocho Rios at the home of the reclusive Nyahbinghi Rastafari Elder, Prof-I. 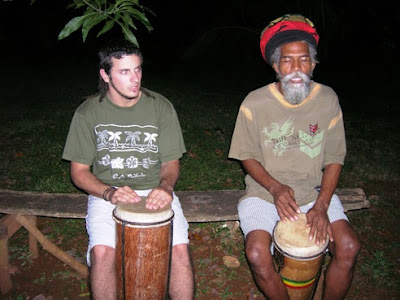 During the first part of his journey through Kingston, Portland and The Blue Mountains, Juan Martin had a revelation without fully realising or understanding it. He encountered many with the dreadlocks that he had long associated with the Rastafari culture yet his intuition told him they were not the Rastas he was seeking. He would later understand that there are Rastas and then there are Dreads, and that there's a whole world of difference between the two.

On his arrival at The Blue House Luxury Bed and Breakfast in Ocho Rios where I am blest to be the innkeeper, I introduced Juan Martin to a Rastafari I have contact with on a day to day basis. Juan Martin instantly realised that he was finally face to face with a genuine Rasta, one who was more than willing to sit and chat with him about the various aspects of the Rastafari culture he had spent so many years eagerly researching in Argentina. I simply stood back and watched as happiness and joy glowed brightly in my young Argentinian friend's eyes.

Juan Martin had long dreamed of beating drums with the Nyahbinghi so the next morning we set out on an adventure to seek out a particular Rasta who is revered by many as an Elder of the Nyahbinghi. I had heard that, from time to time, this Rasta Elder would hold Binghi at his home where many of the Rastafari would gather to chant and drum.

I'll admit that I was more than a bit apprehensive about barging in, unannounced and uninvited, into the home of strangers, intruding in their very private space, especially having heard that the Rasta Elder we sought is a bit of a recluse. I can only say we were extremely blest that day. On later reflection, we all agreed that our initial meeting was like a harmonious intertwining of like spirits.

Prof-I later told me that when he stepped out to meet us, he immediately sensed our kindred spirits. He realised first off that we were not run of the mill, curiousity seeking tourists coming to invade their privacy and snap photos. He therefore welcomed us with the peaceful, loving, gentle, humble nature that is indicative of a genuine Rasta. We sat with him for hours while "I-Tin" (Juan Martin's new Rasta name) attempted to drink his fill of the culture he had dreamt about for so many years. Esctatic, I-Tin seemed to be floating a foot off the ground.

Prof-I openly shared with us the simple lifestyle he lives with his family on a few acres of land. They live off the land, eating whatever it provides. He regaled us with story after story of living a life of persecution because of his choice in living true to his chosen faith, starting at aged 9 when his own mother put him out of the house because he announced that he was going to become a Rasta. Many in our own Jamaican culture perceive the Rastafari as nothing more than "dutty ed and wutlis" (dirty head and worthless), never bothering to open their minds or their hearts to the true nature, culture and religious practices of the Rastafari. Despite all the trials he faced in life, Prof-I now seems very content in, and I quote, "living an ancient lifestyle in a modern world".

As the day progressed to evening, a family from Toronto, with 2 children, who were also guests at The Blue House, joined our gathering. Prof-I, who has thrived on a raw food diet (the latest health food rage) for the past 32 years, whipped us all up a delicious meal of "live food" which is the correct Rasta terminology for raw food.

With full bellies, we were then treated to the most amazing, most mesmerizing experience of my life to date.

Six of Prof-I 's fifteen children, ages 5-15, gathered around with drums and treated us to an impromptu and totally captivating "jam session". They chanted songs they had written themselves about the Rasta culture and their simple lifestyle, effortlessly and lyrically rolling out one song after another. We all simply sat in awe, entranced and filled with the joy, love and peace that resounds in this Rasta family's humble home.

Totally mesmerized as we all were, it was extremely difficult for each one of us to finally pull ourselves away for our return to The Blue House where a much delayed dinner awaited us.

I-Tin returned to Prof-I's home several more times before reluctantly heading off to Negril for the final lap and the winding down of his "dream" vacation.

Back home in Argentinia, Juan Martin now has a new dream, to return for an extended stay in Jamaica and to maybe one day produce a film about the Rasta culture he loves so much.
Posted by Elise Yap at 4:45 PM

I read your blog, and I myself couldn´t have depicted so well the deep feelings that being with Prof-I arose on me.
I shared the reading it with a friend who is also fond of the Rasta culture and couldn´t believe what you did for me. He said that reading what you wrote in the blog made him live again the moment when I told him about my experience on the island.
My two last days in Negril were not what I expected, I can´t believe people visit it and think they have known Jamaica.
Strolling along the beach I was offered all possible type of drugs, the only positive issue about Negril is its sunsets.
The nyhabinghi experience I went through, fills my heart as days pass by. I play drums nearly every day and listen to the CDs Prof-I gave me ( nyhabinghi chant and Prof-I´s children´s songs) as a way of keeping in contact with the Rastafari culture.
Please tell Prof-I that I really long being there again, listening to his wise words and sharing the spirit of his teachings.

I and I sends you lots of love and hugs
Blessings,
I-Tin

hi i-tin. i read your story and it is great! i was wondering if you would be willing to let me ask you some questions and such about your experience with rastafari that i could put in a book i am writing. it would be great if you could and i would be very appreciative. thanx.
respect.

you can contact me on my blog which is http://rastafariworldwide.blogspot.com/ and then i could give you my e-mail or something.

Incredible and the best deals on Cheap Flights to Sydney with lowest prices right away just with Crystal Travel.

Please Visit my The Best Deals Online 2017 Blog at https://thebestdealsonline2017.wordpress.com/

Complete the form below to receive notification of new posts on this blog.

Elise Yap
Ocho Rios, St Ann, Jamaica
The Blue House Luxury Bed & Breakfast Villa was awarded second place Best New Hotel internationally and my head’s still spinning a bit from that. At The Blue House, where I am the innkeeper, I am passionate about introducing travellers to the Real Jamaica: our diverse culture, scrumptious foods and off the beaten path experiences. My entrepreneurial skills were honed at 6 y-o when I bought seconds from a candy factory and marketed them to kids in my kindergarten class. At 12, I set up a barbecue stand outside my Mom's neighbourhood bar which ultimately led to the proliferation of "drum pan chicken" across the island. I’ve been a computer programmer, a systems analyst, had a colourful sales career in North America, been a clown in Toronto, an event decorator specializing in corporate functions and ran a chain of tourist gift shops across Jamaica. Four years ago, I was Born Again and was led by The Spirit to create Bread Basket Ministries, a Christian Non Profit Charity that serves the destitute in and around Ocho Rios. I'm on a deeply spiritual path of discovery, am in awe of God and committed to working at fulfilling the purpose He created me for.